Jerusalem - its place in God's purpose 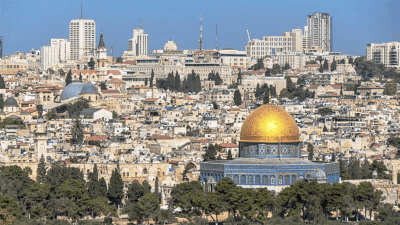 For many centuries,  right down to the present day, the city of Jerusalem has been the scene of many violent sieges, battles and terrorist attacks.  It is a city which is held sacred by three major religions - Judaism, Islam and Christianity, and has therefore passed through the ruling hand of many peoples after endless passionate and bloody confrontations.

When we consider such a turbulent and unparalleled history of one city, we are moved to wonder why it is that Jerusalem is so important.

Foretold by the Bible

When we turn to the Bible,  we find much written concerning this special city and we learn that all the infamous acts performed in and for Jerusalem are no mere accident.  Its fortunes throughout the ages have not been left to chance.  We find that God, through his prophets over 2000 years ago,  foretold that He would make this very city “a cup of trembling unto all the people round about” and that it would become “a burdensome stone for all people”.  History testifies that this has been the case in the past, and it is destined to be so again in the future.

However, the Bible record of Jerusalem does not end with such scenes of violence;  it also has much to say about its glorious future, which will greatly surpass its past state.  The present position of Jerusalem  -  in Jewish hands, the troubled centre which the whole world nervously watches - is right in line with God’s purpose with the city.  God intends to bring about world-shattering events which will raise Jerusalem to the elevated position of capital of the whole world.

Consider the following brief analysis of God’s plan with Jerusalem as revealed in His word, the Bible.

As far back as the time of Moses, God had declared his intention regarding a place on earth that he would “choose to cause his name to dwell there”.

He has repeatedly left on record His special affection for the city of Jerusalem.

During his days on earth, Jesus, walking through the streets of Jerusalem, wept as he contemplated the imminent destruction of the city by the Romans.   He cried,

“O Jerusalem, Jerusalem... how often would I have gathered thy children together... and ye would not!  Behold, your house is left unto you desolate”  Luke  13:34-35

And yet, Jesus knew that it was in his Father’s purpose that  Jerusalem should not be left desolate for ever.  He continued,

“Ye shall not see me, until the time come when ye shall say, Blessed  is he that cometh in the name of the Lord” verse 35

He had previously referred to Jerusalem as,

thus prophesying of a time when he would be accepted and exalted by the inhabitants of Jerusalem as their king, as opposed to the ignominious death he suffered there at the hands of his fellow Jews.

The prophets of Israel also spoke volumes of a future time of restoration and glory for Jerusalem. Isaiah for example:

“Awake, awake... O Jerusalem, the holy city: for henceforth there shall no more come into thee the uncircumcised and the unclean” Isaiah 52:1
“Rejoice ye with Jerusalem, and be glad with her....For thus saith the LORD, Behold, I will extend peace unto her like a river” Isaiah 66:10, 1

This time of restoration will not be until God's kingdom on  earth  is  once more established in Israel (a subject  which  is  dealt with in other articles).  Then the throne of the Lord will once again be set up in Jerusalem (as it was in the reigns of David and Solomon and their sons),  from whence  the returned and victorious Lord Jesus Christ, “David’s greater son” will dispense world-wide justice and peace.

“The LORD of hosts shall  reign in mount Zion,  and in Jerusalem”  Isaiah 24: 23
“The law shall go forth from Zion, and the word of the LORD from Jerusalem.”  Micah 4:2

When will this be?

We believe the long foretold exaltation of Jerusalem into a glorious metropolis will be very soon.  Jesus indicated that the purpose of God conceived an end to Gentile down-treading of Jerusalem (see Luke 21:24) and that “all nations” will be gathered together “against Jerusalem to battle” for the last time.

"For I will gather all nations against Jerusalem to battle; and the city shall be taken, and the houses rifled, and the women ravished; and half of the city shall go forth into captivity, and the residue of the people shall not be cut off from the city." Zechariah 14:2

This time, however, God will not allow Jerusalem to be torn apart and desolated by the warring antagonists, but will intervene... to secure the peace of this city - for ever.   Instead of being the centre of conflict it will become the centre of worship.

"And it shall come to pass, that every one that is left of all the nations which came against Jerusalem shall even go up from year to year to worship the King, the LORD of hosts, and to keep the feast of tabernacles." Zechariah 14:16

Jerusalem and the future

The hope of every man and woman who earnestly desires the salvation offered by God is closely tied up with the fortunes of this city. Jerusalem is a very literal city; and the aspiration of the faithful is as real as the city itself. The Psalmist expresses it very well:

“Our feet shall stand within thy gates, 0 Jerusalem.... Pray for the peace of Jerusalem: they shall prosper that love thee” Psalm 122:2,6