One Bible, many churches - why? 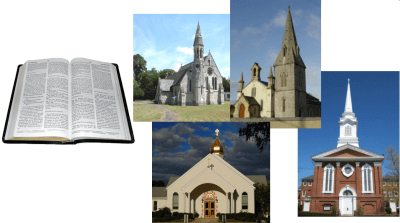 The Bible is, we might say, the handbook of Christians. It contains the teaching upon which the Christian faith is built. So the question arises, why are there so many Christian faiths but only the one Bible?

Christianity began in the days of Jesus some 2000 years ago when it was preached by him and the Apostles after him. The New Testament of the Bible (the record of the lives and teachings of Jesus and the apostles) is reckoned to have been completed by about 100AD (the Old Testament being already completed by Jesus’ day).

Obviously then, for a great number of years after the days of Christ, people had to rely on hearing the Bible message ‘second hand’, being told what its message was. In England, this was the situation for some 1500 years! So what happened in that time that brought about the present state of Christendom?

The true message changed into fables

There is really only one logical explanation; that the original message was changed. The present state of the Christian church is the result of 2000 years of change; change in the fundamental doctrines and attitudes that comprised the original teaching of Jesus and the apostles, recorded in the Bible. That must be the case; there is surely no other explanation!

We should not be surprised at this fact, because there is a warning in the Bible that this would be the case; that there would be a gradual turning away from the original Bible teachings.

The apostle Paul wrote a letter to his fellow disciple Timothy, in which he encouraged him to preach God’s word as much as he could because the time would soon come that men and women would stray from that truth.

“Preach the word; be instant in season, out of season; reprove, rebuke, exhort with all longsuffering and doctrine. For the time will come when they will not endure sound doctrine; but after their own lusts shall they heap to themselves teachers, having itching ears; And they shall turn away their ears from the truth, and shall be turned unto fables.” 2 Timothy 4:2-4

Paul warned Timothy of a time when sound doctrine (God’s truth) would not be endured. Some things would be considered by the hearers of that word to be too hard, too much trouble to follow, and so new teachings would be devised which would suit better the sensibilities of the day. Speaking to the believers at Ephesus Paul also warned,

“For I know this, that after my departing shall grievous wolves enter in among you, not sparing the flock. Also of your own selves shall men arise, speaking perverse things, to draw away disciples after them.” Acts 20:29

Another warning was of leaders arising speaking perverse things, perverse because they were directly opposed to God’s word, for the specific purpose of attracting followers of their own. We can see that this is now commonplace within the realms of Christianity today. Take Roman Catholicism for example. Its followers are more disciples of the Pope than of God, deceived into doing so through the false claim of the pope that he is in Christ’s stead on the earth. And the Church of England has its archbishops and reverend gentlemen who are looked to as the source of doctrine and beliefs rather than the Bible itself.

The apostle Peter also spoke of these false teachings and false teachers which many would follow.

“But there were false prophets also among the people, even as there shall be false teachers among you, who privily shall bring in damnable heresies, even denying the Lord that bought them, and bring upon themselves swift destruction.   And many shall follow their pernicious ways; by reason of whom the way of truth shall be evil spoken of.” 2 Peter 2:1-2

False teachings are described by God as damnable heresies and pernicious (destructive) ways. The result of such teaching was that the truth would be evil spoken of. This false teaching took such strong hold that the tables were turned so that the truth came to be considered to be wrong teaching.

When Jesus was speaking to a Samaritan woman about true religion, he used some very significant words:

“But the hour cometh, and now is, when the true worshippers shall worship the Father in spirit and in truth: for the Father seeketh such to worship him.” John 4:23

The fact that there are ‘true worshippers’ implies that there can also be false worshippers! True religion does not consist of a mere outward show of praise and worship of God, but rather it is deeper than that. What Jesus meant was a life of service to God based upon a full understanding of the true gospel message. We need to discover the truth by humble reference to God’s word, and to apply it in daily living. This is worship ‘in spirit and in truth’.

Jesus declared very plainly that false worship is vain worship - it is a waste of time.

“But in vain they do worship me, teaching for doctrines the commandments of men.” Matthew 15:9

Some might argue that a possible reason for there being many religions despite there being only one Bible is that the message in the Bible is ambiguous and therefore open to more than one interpretation. There is at least one passage of the Bible that clearly disputes that this is the case - words of the apostle Paul:

“For God is not the author of confusion, but of peace, as in all churches of the saints.“ 1 Corinthians 14:33

It follows then that if there is one true message contained in the Bible and it is not confusing or ambiguous, then the many different Christian religions that are established today have come about for one simple reason; namely an incorrect understanding of the true message as the Bible accurately predicted.

This is a practice that started in the days of Jesus and has continued ever since. Jesus often rebuked the people of his own day for not acting in accordance with what they read. The apostle John recorded one such example.

“Search the scriptures; for in them ye think ye have eternal life: and they are they which testify of me. And ye will not come to me, that ye might have life.” John 5:39-40

In other words the people to whom Jesus spoke read the scriptures and thought they believed in them, but demonstrated their complete lack of understanding in them because they didn’t realise they spoke of Jesus!

Another example of Jesus’ open criticism of such a situation is recorded by Matthew.

“Jesus answered and said unto them, Ye do err, not knowing the scriptures, nor the power of God.” Matthew 22:29

The Sadducees (a sect of the Jews in Jesus' day) did not believe in the resurrection. Jesus clearly highlights the fact that they did not know or correctly understanding the scriptures.

The present state of the Christian church is the result of 2000 years of change. Over the years since the original preaching of the gospel message and its being put into writing, there has been a dilution and distortion of God’s truth until false beliefs are now commonplace.

It is however essential for the salvation of men and women, that they have and hold on to the one true message contained in the Bible. Some more words of the apostle Paul sum up the required attitude to adopt in seeking to understand the true Bible message. They are words written to believers in the first Christian church at Thessalonica.

“Prove all things; hold fast that which is good.” 1 Thessalonians 5:21