Regathering of the Jews 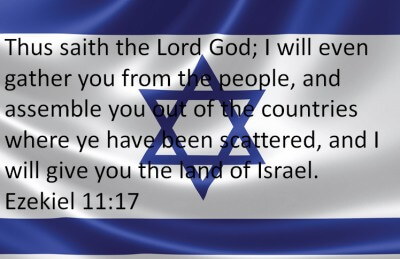 The return of the Jews to the land of Israel after centuries of being scattered in other countries, is an event which the Bible prophesied thousands of years ago.

Just after the resurrection of Christ and his subsequent ascension to heaven, the Jewish people were taken from their land by the Romans and scattered among all nations as a punishment by God for their sins.  This had been prophesied by Jeremiah many years before the event:

“Because they have forsaken my law which I set before them, and have not obeyed my voice....therefore, thus saith the LORD....... I will scatter them among the heathen” Jeremiah 9:13-16

The Jews to be regathered

This however, was not intended to be a permanent arrangement as Jeremiah went on to say:

“Fear thou not, O my servant Jacob, saith the LORD, neither be dismayed, O Israel: for, lo, I will save thee from afar and thy seed from the land of their captivity”  Jeremiah 30:10

Whilst this prophecy awaits its fulfilment in the return of ALL the Jews to their own land, we are privileged to witness in our own day a partial return of the Jews to the land promised to their fathers.  This is an essential part of God's purpose in bringing about the settlement of the whole nation in the land of Israel, as can be seen from Ezekiel 38:3-12.  Here, the coming invasion of the land by Russia (see article regarding Russia) demands a strong settlement of Jews in the land, which has been the case since the establishment of the State of Israel in 1948.  It will be interesting to trace the events which contributed to this development.

The sequence of events

In the latter part of the 19th century, the intensification of anti-Semitism in Europe prompted Theodore Herzl, a Hungarian Jewish journalist, to found the Zionist movement to provide a place of refuge for persecuted Jews.  At that time there were very few Jews in the land of Israel (or Palestine as it was then known), and the land itself was suffering from years of neglect.

The State of Israel established

The Zionist movement gained momentum, though the Jews returning to the land were still very few. It was not until 1917 that any great change was seen.   In that year the British government issued the following declaration (known as the Balfour Declaration after Henry Balfour, then British Foreign Secretary):

“His Majesty's government view with favour the establishment   in   Palestine of a national homeland for the Jews.......”

At first, the return of the Jews to their homeland was only a trickle, but this slowly increased until (following the establishment of the State of Israel in 1948) it became a flood, so that today (2018) there are around six million Jews in the land.

The return of Christ

These events herald the return of Christ to the earth.  Although the Bible foretold this partial return of the Jews, their complete restoration to their land will not take place until Christ is reigning from Jerusalem.

As could be seen in Jeremiah’s prophecy, the Jews were scattered because they disobeyed the law of God.  In spite of this, God has promised to restore them to their land to keep the oath which he swore to the fathers of the Jewish nation for their faithfulness, and for His holy name’s sake (see Deuteronomy 7:6-8 and Ezekiel 20:21,22).   So, when all the Jews are gathered from all over the world, it will be only those who turn to God who will be allowed to dwell in the land in the kingdom of God, and those who will not accept Jesus as their king will be purged out (see Ezekiel 20:33-38).  Then God will put His law in the hearts of the Jewish people and they will serve Him, as Jeremiah again wrote:

“I will put my law in their inward parts, and write it in their hearts; and will be their God and they shall be my people” Jeremiah 31:33.

As a result of the favourable position with their God to which the Jews will be brought, they will discover that they will no longer be the hated people of the earth and the scapegoat for all that goes wrong, but instead they will be sought out by the people of other nations (see Zechariah 8:23).

Those nations who recognise the Jews as God’s people and submit to the rule of Christ, the king of the Jews, will themselves experience the blessings and prosperity flowing from their obedience to Gods law.

Those individual men and women who now choose to obey God’s commands will experience more than prosperity.   The apostle Paul, when writing of the position of the Jews relative to the Gentiles (or non-Jews) said:

“If the casting away of them (the Jews) be the reconciling of the world, what shall the receiving (or regathering) of them be but life from the dead?”  Romans 11:15

Yes.  Resurrection from the dead and eternal life in God's kingdom on the earth is the hope of the faithful!  Positions of rulership with Christ over the nations of the earth are also held out to those who follow Christ now (see Revelation 5:9-10).