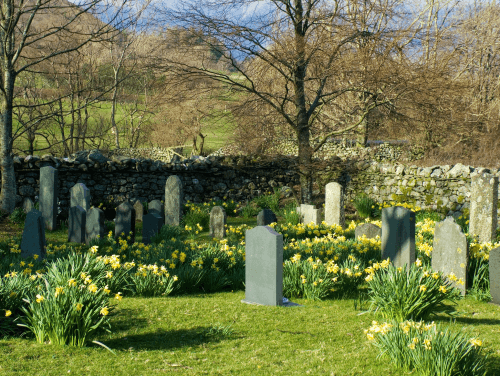 The old Protestant doctrine that hell is a fiery place of eternal torment where the wicked are thrown at death is today a thoroughly discredited notion which no-one in orthodox Christendom seems to believe. The reason it is no longer accepted is that there is a state of feeling among men today which makes light of sin.

The Elizabethan word “hell” means simply “a covered place”. When the King James version was translated this word was an exact translation of the original languages used in the ancient manuscripts, both of the Hebrew Old Testament and of the Greek New Testament. We can see from looking at the word HELmet, the idea of a covering - in this case for the head. Not so long ago, when, in Lincolnshire, the farmers were making potato-clamps to preserve the tubers through the winter, they always spoke of “helling up the potatoes” - they were putting them in a covered place - making a grave for them. This is exactly what the word “hell” means in the Bible - the grave.

The word in the Old Testament is translated from the Hebrew word SHEOL but when used in the New Testament comes from the Greek word HADES. These words mean simply a covered place or the grave. Let us take some examples.

The hell of the Old Testament

In Psalm 116 the Psalmist is speaking of death and the grave as natural associates of hell.

"The sorrows of death compassed me, and the pains of hell gat hold upon me." Psalm 116:3

He could not be meaning that the flames of the conventional hell had begun to scorch him for there is nowhere any mention of fire - just sorrow and pain as when a man is dying. Sometimes when the word SHEOL occurs in the inspired Hebrew writings the translators have correctly written “the grave” as in Psalm 31.

" Let me not be ashamed, O LORD; for I have called upon thee: let the wicked be ashamed, and let them be silent in the grave". Psalm 31:17

To the translators in 1611 AD, the grave and hell were synonymous terms. It was because, later in time, religious leaders wished to inspire fear in the hearts of men to bring them into obedience to the church for the purpose of extorting money and goods, that they gave the word “hell” its traditional fiery connotation.

The hell of the New Testament

Now we come to look at a New Testament example - remembering that the Greek equivalent of SHEOL is HADES. In the following passage, it is clear that the hell (hades) is used in a figurative sense.

"And thou, Capernaum, which art exalted unto heaven, shalt be brought down to hell: for if the mighty works, which have been done in thee, had been done in Sodom, it would have remained until this day". Matthew 11:23

The overthrow and the ruin of a city (Capernaum) may be figuratively described as bringing it to the grave but surely a city cannot be pictured as going down into the orthodox hell! Sometimes, the New Testament quotes the Old Testament and when it does this, the word sheol is always translated by the inspired Apostles as HADES. The apostle Peter, in Acts 2 quotes one of David’s Psalms, showing that there is a prophecy of Christ’s resurrection from the grave.

“Thou wilt not leave my soul in hell (SHEOL) neither wilt thou suffer thine Holy One to see corruption”. Psalm 16:10

If we now look at read Peter's quote in Acts 2 you will understand that he is explaining that Christ would be raised from the dead ie. his body was not left in the grave.

"Because thou wilt not leave my soul in hell, neither wilt thou suffer thine Holy One to see corruption. Thou hast made known to me the ways of life; thou shalt make me full of joy with thy countenance. Men and brethren, let me freely speak unto you of the patriarch David, that he is both dead and buried, and his sepulchre is with us unto this day. Therefore being a prophet, and knowing that God had sworn with an oath to him, that of the fruit of his loins, according to the flesh, he would raise up Christ to sit on his throne; He seeing this before spake of the resurrection of Christ, that his soul was not left in hell, neither his flesh did see corruption. This Jesus hath God raised up, whereof we all are witnesses." Acts 2:27-32

How is it possible to imagine that the sinless Jesus went down into fiery torments for three days and then God raised him from the death-state of complete oblivion and gave him an immortal body?

There is, in the New Testament, another word translated hell which Jesus himself uses. It can be found in several places, one of which is shown below.

Here the word translated “hell” is gehenna which is the Greek form of a Hebrew word ben-hinnom. This word means son of hinnom and has an interesting Old Testament background. The valley of Hinnom, just on the outskirts of Jerusalem, had been used by the Jews as a place of abominable idol worship. Josiah, a righteous king of Judah, had defiled it and caused it to be used as a place of refuse destruction, destroying the idols Israel had foolishly worshipped there (see 2 Kings 23:10). In the days of Jesus, it was still used as a rubbish dump where the dead bodies of criminals were thrown to be destroyed by worms and smouldering fire. This is the source of the figurative language used by Jesus in Mark 9 to describe the fate of the wicked.

We have seen that the Bible doctrine of hell is purely and simply THE GRAVE where the dead are covered over out of sight.  We have also seen that there is another Greek word which the translators saw fit to translate as hell.  It refers to the rubbish tip that existed outside Jerusalem and Jesus uses the word as an example of what will happen to the dead and unconscious bodies of the wicked after their rejection at his judgement seat.

We can see then, that conventional teaching of the Protestant churches after the Reformation - of hell as a place of eternal fiery torment - is a figment of the churches imagination and forms no part of the teaching of God’s word.  It was invented by the Bishops to inspire obedience, through fear, on the part of the then illiterate common people who could not read the Bible for themselves.  Today we are not illiterate, and the Bible is available for all to study and carefully examine. Those who seize the opportunity and learn its TRUE message will be rewarded with eternal life (as was our saviour, Jesus Christ - he was not left in “hell” and neither will we be if we please God) when he returns to the earth to reward his friends (see Revelation 2:7, 26-28).